During the Illinois probate process many disputes can arise. Our St Charles probate litigation attorneys can safeguard yourself and heirs from false inheritance claims during probate court.

When a loved one dies, a probate court usually oversees the process of sorting out the decedent’s estate and ensuring that the instructions in the Will and Trust are upheld.

Your Illinois estate is managed and distributed through a court-managed process called probate or estate administration after you or a loved one passes away. Our St Charles law firm is experienced with the Illinois probate process. We are here to work hard with your loved ones to navigate the estate administration process as efficiently as possible. 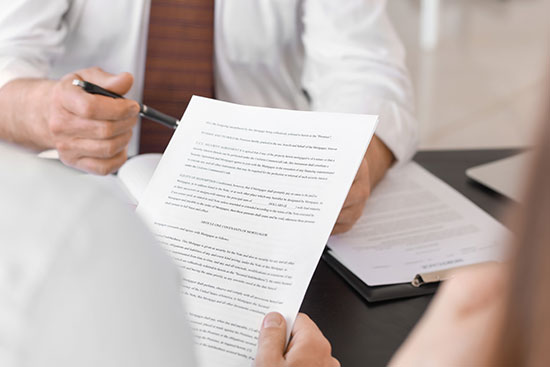 What is the Probate Court Process?

Probate is a court-supervised process to distribute assets to beneficiaries after your or a loved one’s death.  Any assets owned in your name or made payable to your estate will go through probate.

What to Expect During Probate Litigation?

The process of administering an estate is not always routine or amicable. Families may disagree about distribution plans or even the content of these documents.

Strohschein Law Group uses settlement, mediation, or litigation to help families clarify the terms of a loved one’s Will, Trust, or Powers of Attorney and resolve any disputes over these documents. Our attorneys are experienced in handling claims of Will and Trust contests.

How Can an Illinois Probate Attorney Help You During Probate?

Our law office will provide sound legal advice to guide you or a loved one through the Illinois probate administration process. We can help you move the process along quickly and facilitate a smooth transfer of assets following a loved one’s death.

Our office was contacted by John who wanted to protect his brother Jack whose mental abilities were declining due to illness. A guardianship estate was sought, and an emergency temporary guardianship was put into place for protective purposes. Another brother Jerome also sought guardianship and filed his own petition for guardianship. Both sides were distrustful of the other and despite several attempts at settlement, neither side was able to come to an agreement. The Court heard testimony at the trial trying to resolve two open issues.

The first issue was whether Jack needed a guardianship. The second issue was which of the two siblings would be able to provide the best quality of care and oversight of the disabled sibling’s finances. The Court determined that a guardianship was necessary and appointed John as both Guardian of the Estate and Person. A visitation schedule was put into place and the family was able to resolve some of their differences.

Our attorneys represented the Executor of the estate and Trustee of the trust in managing Christopher’s estate who died leaving significant debts. After notification to all known and unknown creditors, it was determined that there were over 100 legitimate creditors entitled to payment of their debts.

At the same time, the Trustee sought the direction of the Court in interpreting an unusual trust document that was thought to be a “listed transaction” by the Internal Revenue Service. Christopher appeared to have created an illegal asset protection trust during his lifetime to avoid payments to his many creditors. Christopher was led to believe that a Revocable Trust could help him avoid his creditors, which it cannot do. Upon his death, the insurance proceeds were payable to such trust, which the Trustee could not in good faith honor without incurring personal tax liability. Christopher also did not pay his income taxes in the three years prior to his death, resulting in additional claims against his estate. Even though Christopher had significant debts which consumed all the proceeds from the insurance policy, its very existence required the filing of a Federal Estate Tax Return. Without the right advice during his lifetime, Christopher’s estate ended up being much more complex and much more costly to administer upon his death.