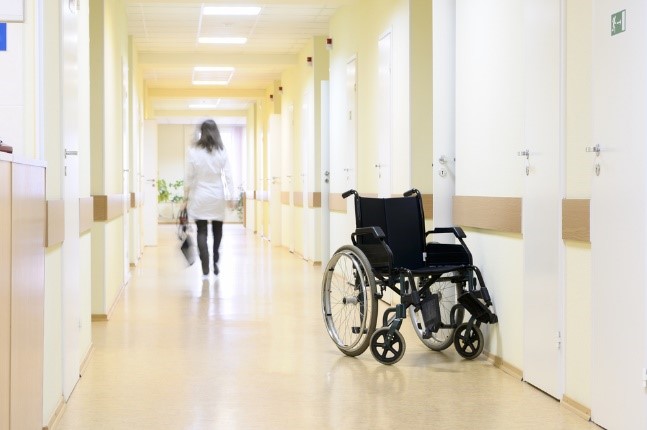 Overwhelmed by the stress of long hours, low pay and exposure to the COVID-19 virus, nursing home workers are quitting in record numbers. The labor hemorrhage has turned what was already a chronic staffing problem into a full-blown crisis in many facilities and entire states as understaffed nursing homes struggle to care for patients, accommodate family visitation, and admit new patients waiting in hospitals to be discharged.
The crunch has even forced some states – including New York, New Jersey, Minnesota, Maine, New Hampshire and Indiana — to deploy the National Guard to empty bedpans, give baths and distribute meals.
“It’s beyond a crisis,” Katie Smith Sloan, the president of Leading Age, an association of nonprofit long-term care facilities, told The New York Times. “For many providers across the country, it’s a collapse.”
‘No One Would Come’
According to the U.S. Bureau of Labor Statistics, 425,000 employees, many of them of them nursing assistants, have left the nursing home workforce since February 2020. Certified Nursing Assistants (CNA), provide 80 to 90 percent of direct care for long-term care patients and make up 40 percent of nursing home employees.
In a June 2021 survey by the American Health Care Association and the National Center for Assisted Living, 94 percent of nursing home providers reported a shortage of staff, and 58 percent were limiting admissions because of the shortages.
With fewer nursing assistants working in short-staffed facilities, residents don’t get as much one-on-one interaction with their caregivers as they need, don’t get as many showers, and don’t get turned as often in bed to prevent bedsores from developing.
One North Carolina woman witnessed it first-hand with her 74-year-old mother, according to an Associated Press report. When visitors weren’t allowed inside the nursing home, she saw through her mother’s window that sometimes she sat for hours in a soiled diaper, with matted hair and a bedsore the size of a fist. Unable to use a phone by herself, the mother would cry for assistance.
“She would call out for help and no one would come,” her daughter said. “There was no one around.”
Meanwhile, although nursing homes contain less than one-half of 1 percent of the U.S, population, they account for 2 percent of the COVID-19 cases and 25 percent of the deaths, according to a report by the advocacy group U.S. PIRG.
Admissions Backlog Hurting Hospitals
Faced with the loss of employees during the pandemic and the difficulty in recruiting replacements in a competitive market economy, nursing home administrators have been forced to limit new admissions and close off whole floors in their facilities.
This has caused hospitals to keep patients longer who are waiting to be discharged to long-term care after surgery or illnesses and has resulted in fewer beds being available for COVID-19 cases flooding hospital emergency rooms.
While the pandemic has made the staffing crisis in nursing homes more acute, the problem isn’t a new one. It’s a systemic failure in the nursing home industry that’s been neglected for years, according to long-term care experts.
Nursing home workers are among the lowest paid employees in the U.S. economy, earning near-poverty wages, the Paraprofessional Healthcare Institute reported in 2016. With a median salary of $19,000 a year, more than a third of nursing home workers relied on public benefits like food stamps, housing subsidies and cash assistance. Given the low wages, long hours and stressful work, keeping and recruiting nursing home workers when other jobs are available and less demanding is a challenge. Before the pandemic, CNAs in nursing homes had an average annual turnover rate of 129 percent, according to the journal Health Affairs, with some facilities reaching a 300 percent replacement rate.
Nursing home owners are aware of the problem but claim that they can’t raise wages for workers due to the funding that’s available to them. While some long-term care patients pay their own way, most nursing home funding comes from Medicare and Medicaid. Medicare reimburses facilities for short-stay patients coming from hospitals for rehabilitative services, while Medicaid’s reimbursements are determined by the states, and the program pays for the majority of long-stay patients in nursing home populations.
On average, Medicaid pays half as much per day for long-term care as does Medicare ($206 v. $503), according to a 2018 analysis by the non-profit National Investment Center for Seniors Housing & Care.
“Everyone knows that Medicaid underpays,” David Gifford, chief medical officer for the American Health Care Association (AHCA), which represents assisted living and long-term care facilities, told CNN. “Salaries are about 70 percent of our revenue overall and so we just can’t offer competitive salaries compared to hospitals and other settings.”
Some nursing home providers as well as federal, state and local governments are taking steps to address the staffing crisis. An October 2020 U.S. Department of Health and Human Services report found that increased wages and augmented benefits like child care, transportation, housing and food support, were being offered to retain staff in some facilities and localities. Hard-hit Minnesota recently announced a plan to train 1,000 new CNAs.
Meanwhile, the Biden Administration’s Build Back Better plan would provide funding for higher wages, tuition assistance and other incentives for nursing homes to attract qualified staff, and would help reduce waiting lists for Medicaid-funded alternatives to nursing home care by giving state home and community-based service (HCBS) programs an additional $150 billion over 10 years. The proposal would also make permanent a program called Money Follows the Person to help nursing homes return younger residents and some older adults to their homes.

Schedule a consultation with one of our experienced attorneys in order to protect what matters for your family.
CONNECT WITH US
Copyright Strohschein Law Group LLC 2022 - All Rights Reserved
Disclaimer | Privacy Policy
Back To Top
Subscribe to Our Newsletter